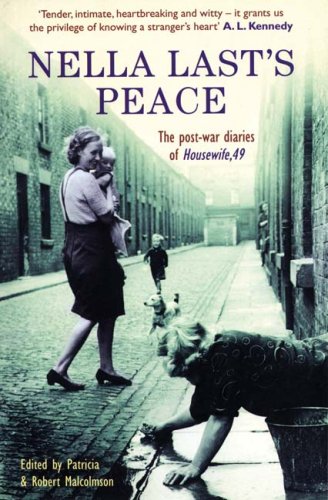 I seem to have been reading very slowly lately, but I can promise you that it is nothing to do with the quality of the last book I've finished. If you saw the TV adaptation of Housewife 49

or enjoyed the book version of Nella Last's War

then you really must not miss Nella Last's Peace: The Post-War Diaries Of Housewife 49.

After the war Nella Last continued writing her regular diary as part of the Mass Observation project and this second book covers the post war period, when Nella was trying to come to terms with her new peace time role. She struggles a bit after the conclusion of the various war time efforts that she participated in, especially her beloved Canteen, and finds it very hard to stay at home rather than being out leading other women to help the soldiers that are fighting Germany.
The power of a personal diary over a book of fiction somehow strengthens the view of Nella's life in post war Barrow. She details some of the smaller parts of her life that a novel may easily look over. One area of complete fascination for me was how much Nella cooked for her and her husband to eat. Despite rationing still being in place, Nella was very proud of how she managed to stretch the rations as far as possible to create a range of meals, and she certainly succeeds. I was let amazed at the amount of food that was prepared, for either lunch, dinner or another evening snack. Every bit of meat or fish was used up and when you compare this to the amount of food wastage that we create today we should feel ashamed.
I've always been fascinated by the way that women ran their homes during the war, but it's easy to forget that many of them had to continue under the same conditions for a while after peace had been declared. Without the camaraderie of it being war time I almost wonder if this period, often still with husbands and sons away from home, was actually more difficult.
A must read book in my eyes.